Bitcoin as a medium of settlement

Noah Smith has some interesting thoughts on Bitcoin as a store of value, both in the long run and the short run. He notes that financial assets face (in equilibrium) a tradeoff between expected return and volatility. In order for markets to be induced to hold a volatile asset, long-term expected returns must be higher. This means that over long time horizons, a relatively volatile asset (such as Bitcoin) may be a better store of value than assets deliberately designed to be non-volatile (such as fiat currency).

Of course, volatility means that an asset is a poor store of value in the short run. And “short run store of value” is what is needed for Bitcoin to be widely adopted as a medium of exchange. JP Koning imagines a world in which neither merchants nor consumers want to be exposed to Bitcoin volatility, and so they rely on payment intermediaries that convert dollars to Bitcoin (and back again). If this is the case, he argues, there is no point in using Bitcoin.

Noah agrees with JP that this is significant. “For bitcoin to become money,” he concludes, “it has to figure out how to massively reduce the volatility of bitcoin prices of goods and services.”

I agree with Noah and JP that Bitcoin volatility is interesting — that’s why I created my own Bitcoin volatility index in February 2014. But I think their analysis is incomplete. Monetary economics is highly contextual, and there are a lot of context-specific factors that continue to make Bitcoin a compelling monetary idea, particularly as a medium of settlement. 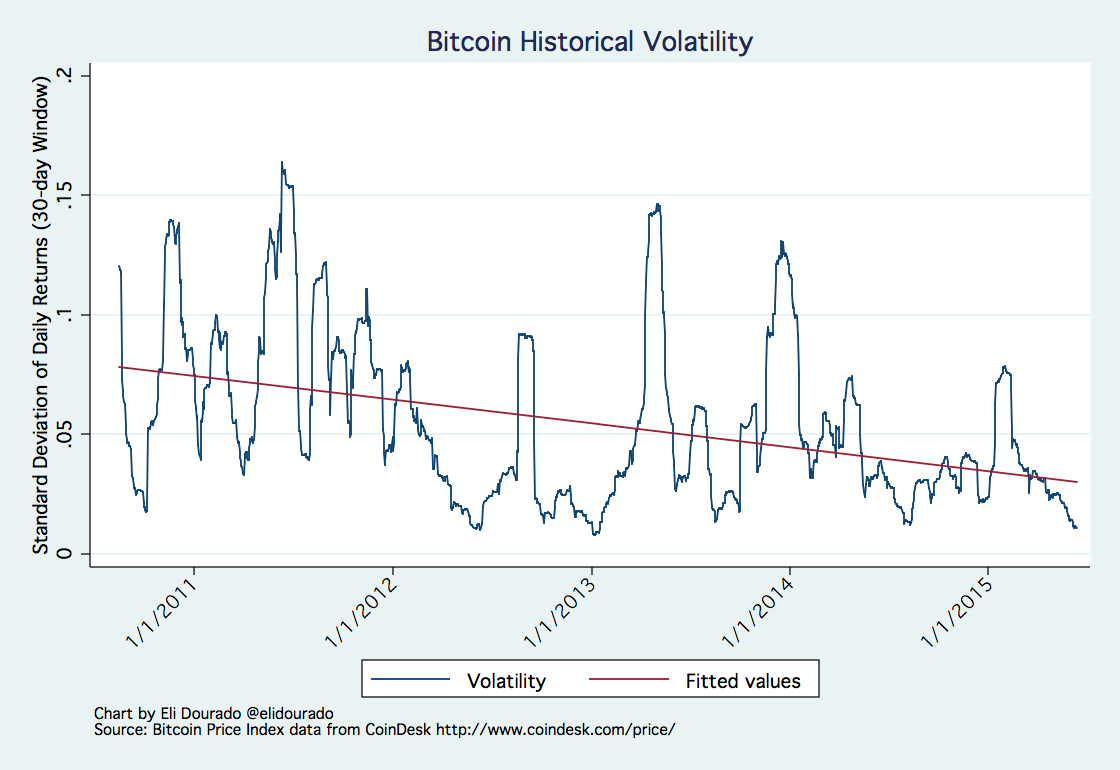 Why is this the case? To me it seems clear that the Bitcoin ecosystem is growing over time. There are more and better Bitcoin exchanges, wallets, and processors than there were in, say, 2011. The Bitcoin derivatives market is still nascent, but it is more liquid than at any time in the past. As this financial infrastructure builds out, it is natural that Bitcoin would become less volatile.

In addition, some portion of the past experience with Bitcoin volatility can and should be chalked up to the need to “find a level” for an entirely new kind of asset. 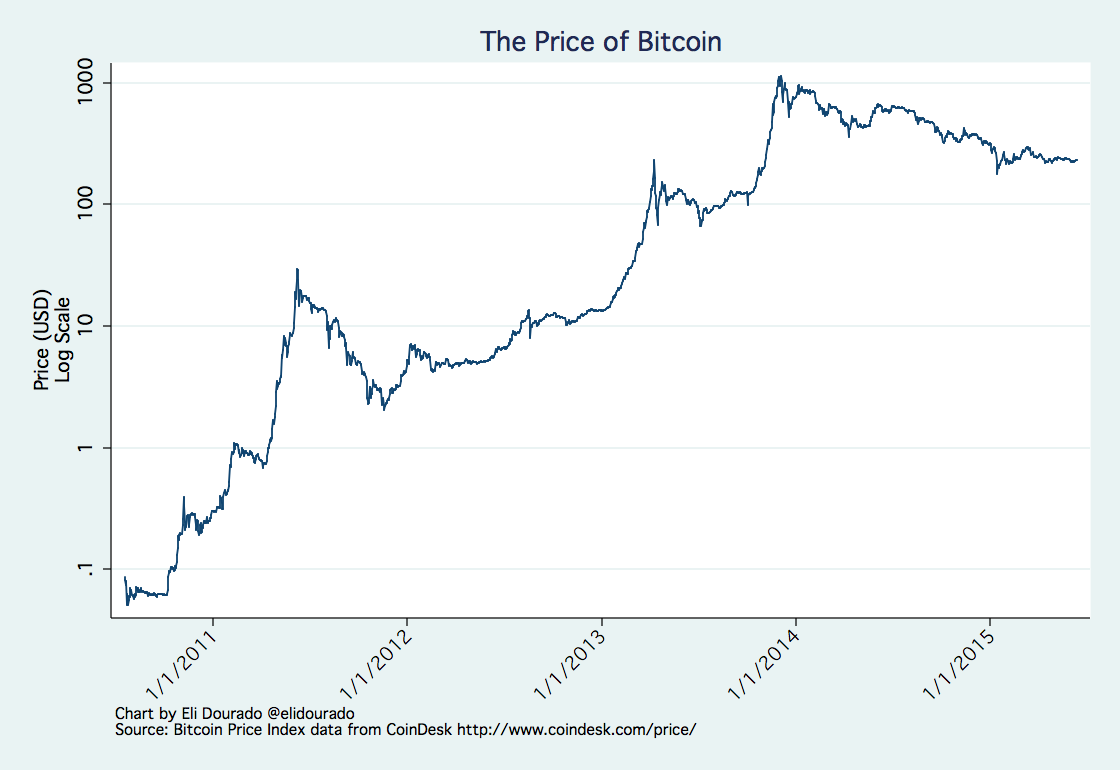 Some, though not all, of Bitcoin’s growing pains are now out of the way. My Bitcoin volatility index currently places the standard deviation of daily dollar-denominated Bitcoin returns at 1.1% over the last 30 days. This is about 2x the volatility of the exchange rate between two well-managed fiat currencies.

Now, nothing suggests that this period of relatively low volatility is permanent. There was a big spike in volatility back in January. It could happen again. Nevertheless, Bitcoin’s volatility is trending downward, and in the long run, 2x fiat volatility seems like a plausible guess for where Bitcoin will end up.

Twice the volatility of a pair of well-managed fiat currencies is not that bad for anyone, but it’s great if you’re from Argentina. Or Zimbabwe. Or even Greece. Or, really, in expectation, most of the people on the planet.

The Fed, the Bank of England, the ECB, the BoJ, etc. are run by serious people who are trying to do a good job. But in most of the world, money is an irresistable political tool. Central banking conspiracy theories that are jokes in the United States are reality elsewhere. And even in countries where central banks are starting to develop a track record of stability, institutions are frequently not as sturdy as we might like. One day their citizens will wake up to a sudden, unexpected revaluation.

With Bitcoin, there is of course the risk that the whole project will fail, but there is no need for the kind of institutional willpower that seems to be necessary for central banks to succeed in the long run. As a result, I think Bitcoin or a future cryptocurrency has the potential to be the short-run store of value of choice in large swaths of the planet.

Bitcoin transactions settle immediately (unless programmed not to do so). In this sense they are more like cash transactions than like credit card transactions. So in order to do apples-to-apples comparisons, we might want to examine other systems of final settlement. One such system is cash. Cash of course has some limitations, chief among them that it is not possible to send cash online without an intermediary.

You may use a payment processor such as BitPay to instantly convert the bitcoins you receive into dollars. I may use a wallet that instantly converts dollars to Bitcoin at the time I want to make a payment. We both have trust relationships with intermediaries, but because the transaction and settlement occurs on the blockchain, we no longer have to trust the same intermediary.

This is relevant when thinking about bringing the next few billion people online and into the global economy. These people will not have credit histories that are accessible to the same intermediaries that I am set up to use. They may have local intermediaries that they can use, or they may be willing to use Bitcoin directly. If that is the case, they will be able to enter into the stream of global commerce.

There are not right now many transactions between rich countries and the bottom couple billion people on Earth. Why is that? Is it because these people have nothing of value to sell or is it because we have no way of transacting with them? We are about to find out.

Direct settlement also means that machine-to-machine transactions will be possible without giving your toaster a line of credit or access to your full bank account. What new inventions will people create when stuff can earn and spend money?

Cryptocurrency in the long run

Not many economists today think about the difference between a medium of exchange and a medium of settlement, but it can be an important distinction. Bitcoin has some extremely attractive qualities as a settlement medium — you can settle multi-million-dollar claims halfway around the world in minutes.

If Bitcoin has a future (still an “if”), that’s where I see it most succeeding — as a global settlement mechanism. Banks in every country will be able to move value around the world at extremely low cost. There will be less need for correspondent banks. We will finally have a unified global financial system to which everyone will have access. Capital controls will become impossible, or nearly so.

And of course, people will be able to use Bitcoin to buy coffee, if that’s really what they want to do. Once Bitcoin is the world’s reserve currency and settlement mechanism, there will be no reason that coffee shops would not accept it, just as there is little reason for them today not to accept cash. But buying coffee with Bitcoin is not what the system is set up for, both in the sense that Bitcoin can’t handle the volume of transactions necessary for everyone to use it for all their purchases and that there is not a compelling reason to use Bitcoin for in-person coffee in the first place.

If Bitcoin somehow manages to survive and take over the market for international settlements, I will consider it a success even if relatively few Americans use it to buy their lattes.