Steve Randy Waldman, aka Interfluidity, is wicked smart. So it was with mild trepidation that I read Nicholas Weininger’s request:

I’d like to see your take on Interfluidity’s posts about inflation-averse influencers, flights to safety, wealth as a positional good for insurance purposes, and the effects thereof on productivity. Relevant links:

Alright, let’s see what I can do.

On inflation-averse influencers, I agree with a lot of the post. I’d quibble with the assumption that our current recession is 100% demand-driven. I favor NGDP targeting, and I think our problems would be less acute if we had more monetary stimulus, but I still think a lot of our problems are structural. NGDP targeting is not going to bring back the 90s. 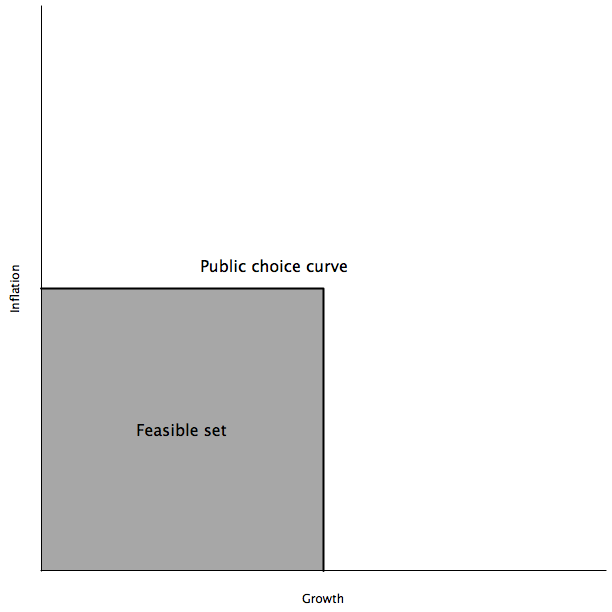 Superimpose the public choice curve over a dynamic AS/AD diagram, properly situated, and you will see why we are stuck. The public choice curve is meant to bolster the argument that recession is ultimately what the polity chooses, but keep in mind also one encouraging and one discouraging thought. The encouraging one is that having a polity that places a ceiling on the rate of inflation it will tolerate is actually an achievement when compared to the alternative. I lived in Brazil in the early 1980s, and while I was too young to really understand the value of money, I remember dropping a few million cruzeiros on a pack of gum. We might rightly call our current public choice curve inverted because there is an inflation ceiling rather than an inflation floor, which is much more common. Again, this is not to deny that we should have more monetary stimulus now.

The most discouraging part of the public choice curve is the bound on growth. There is a lot that a moderately-enlightened dictator could do to increase the growth rate of the economy from the supply side. I wish that people would get as incensed over the political failure on the supply side as they do on the demand side.

On the other post on the insurance value of wealth, I really disagree, not with the proposition that wealth is a kind of insurance for the wealthy, but that this has a significant real effect on employment. I think Waldman elides differences between the real and financial sector and between long and short runs.

Let’s say that Scrooge McDuck goes to his bank, withdraws his billions in $100 bills and puts them in a vault somewhere, as insurance against some improbable bad event. Aside from this, he spends only enough to keep himself alive. What are the real effects of McDuck’s insurance “purchase”? Putting aside any short-run distortions, all he is doing is leaving more real resources for everyone else to consume. Because the money in his vault is not circulating, it has no real long-run effect, at least not to a first approximation. Waldman needs to find some way to reconcile his argument, at least in the long run, with Steve Landsburg’s point about misers.

If you want to say, “OK, the insurance function of wealth does not distort the real economy in the long run, but it has an effect in the short run,” you still have a lot of work to do. First, Waldman needs to walk back the article I referred to in the first half of this post, in which he argues that depression is a choice. Assuming, arguendo, that the wealthy disrupt the circular flow of payments somehow with their insurance demands, why can’t monetary policy fix that? On top of this, I’m not sure that the comparative statics of anything we might plausibly consider _insurance_ work out: you would expect wealthy people to “buy insurance” during good times and “collect a payout” during bad times. But isn’t the problem the reverse, that we observe hoarding in bad times? Finally, inequality is procyclical, so it’s not as if recessions are caused by sudden outbreaks of inequality.

I’m totally willing to consider the possibility that inequality adversely affects the real economy; indeed, I share the sense that most economists probably have that a highly unequal society likely has something wrong with it. I guess I am just an inequality traditionalist who thinks more in terms of plutocracy, unholy alliances between business and government, and standard public choice. While I’m not persuaded by Interfluidity’s account of the inequality-unemployment channel, I’d be eager to read other economists discussing this question.