iTunes and the logic of bundling

Today, Apple announced the new incarnation of their so-called hobby, the Apple TV. The new device is focused on streaming, which is a welcome improvement from Apple’s erstwhile expectation that users manage a library of multi-gigabyte movie files. But the more I think about it, the more I doubt that the iTunes Store that is tied to the Apple TV can continue to thrive. I suspect that without a big change in its business model, it will soon begin to show signs of decline.

The iTunes Store has always been characterized by the logic of unbundling. Why buy an album? Just buy the few songs on it you like. Why subscribe to cable? Just download the few shows you follow. But as it turns out, the logic of unbundling is not as compelling as it seems. In fact, when goods have zero marginal cost (as is approximately true for movies and music), bundling is very often superior to unbundling.

Here is a quick example. Let’s suppose there are 1000 consumers and 10 songs. Further suppose that each consumer’s value for each song is distributed uniformly and independently between 0 and $1. What does the demand curve for each song look like? 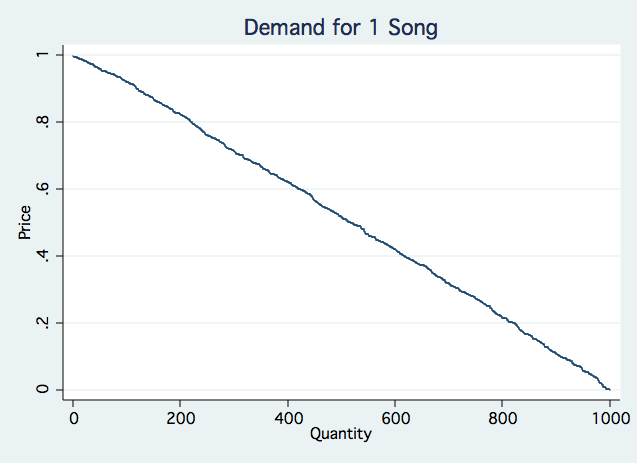 And here is the shocking twist. What does the demand curve for a 10-song bundle look like? Given my assumptions above, it is not a straight line. Rather, it will look something like this. 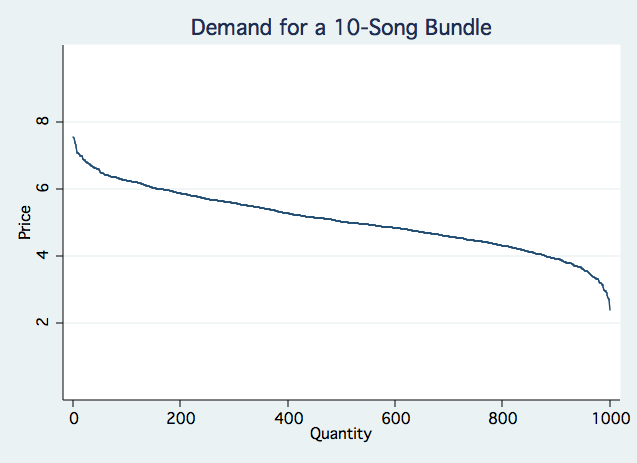 Suddenly, the iTunes Store’s business model doesn’t look so good. Compare the idea of renting movies on your new Apple TV to having access to Netflix‘s entire streaming library of movies. Netflix is a giant bundle that Apple can compete with, for now, only by having better titles. As Netflix’s licensing division negotiates better content deals (which, due to a more effective pricing scheme, it will inevitably be able to do), Apple’s movie rental business is going to wane.

The music side of the iTunes Store is equally in trouble. Companies like Spotify are offering vast libraries of music for rental for very reasonable prices. iTunes is still the world’s largest legal music retailer, but this might be only because Spotify is not yet publicly available in the US. In fairness, the comparison between iTunes Music and Spotify is inexact because iTunes is selling while Spotify is renting, but the basic logic of bundling remains. As companies are able to negotiate the necessary licenses, the unbundled model will fade away.

However, the logic of bundling also means that Apple has plenty of room to improve its offerings. If Apple could beat Netflix and Spotify to the punch and negotiate the requisite licensing first, they could just as easily offer users an enormous bundle. But another revenue generator that Apple hasn’t touched yet is app bundles. Apple should make it easy for App Store developers to band together to offer their apps in a bundle. You’ve heard of MacHeist? It’s the logic of bundling that makes MacHeist a good deal for both developers and consumers. There is no reason that hundreds or even thousands of app developers would not want to participate in bundles on the App store. Greater app sales would mean that Apple would rake in a huge commission.

A lot of people praise the Internet’s ability to allow us to unbundle. We can use RSS feeds to unbundle a column from a newspaper. We can subscribe to a podcast instead of a TV channel. But this is confusing the unbundling of consumption with the unbundling of purchasing. Newspaper columns and podcasts are usually distributed for free; if they are not, then they are almost always part of a bundle that is designed to be more appealing to most people than the standalone product. Unbundling advocates such as the agitators for à la carte cable don’t see this. They think that if a 100-channel cable package costs $50/month, then a 1-channel subscription will cost $0.50/month. But it is only because the 100-channel package contains channels you are not interested in that the cable company can offer you such a low per-channel price.

But whether you think it is a good thing or not, bundling is going to be a pervasive feature of commerce in the digital age. Both you, dear reader, and Apple should get used to it.