Maybe America is simply too big 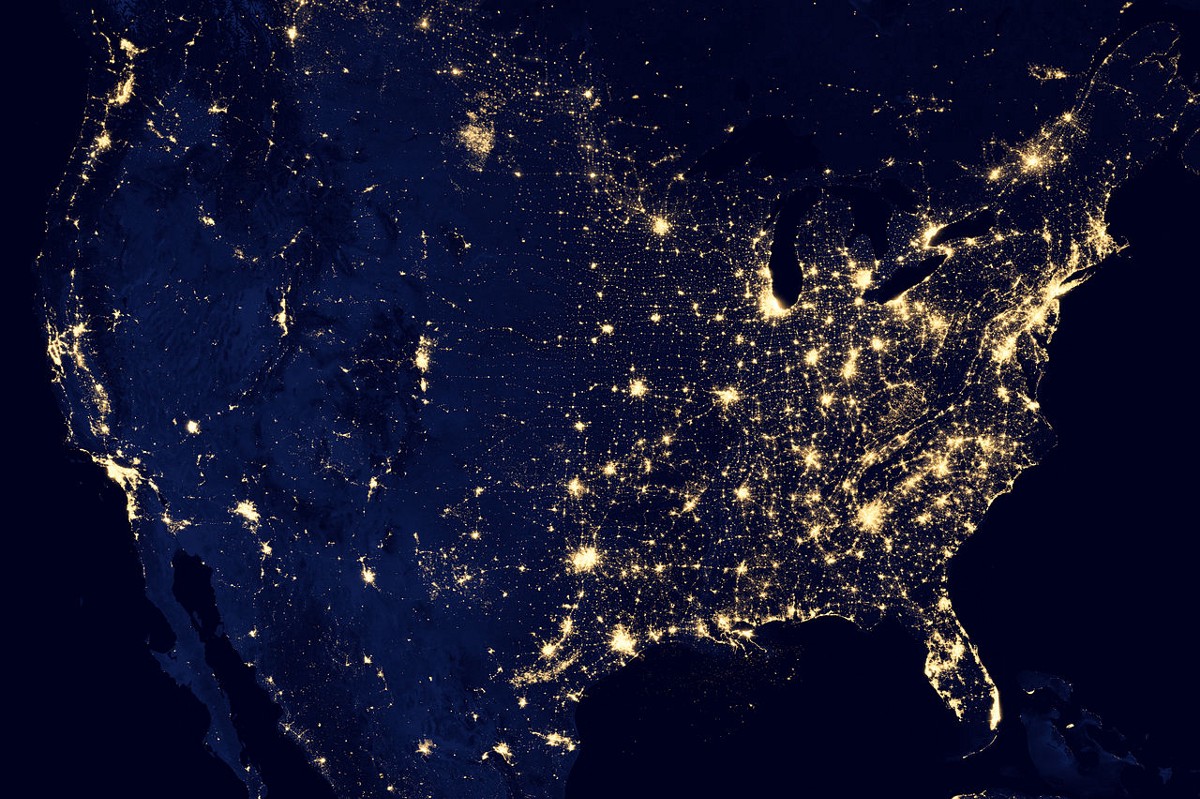 In the aftermath of the election of Donald Trump as President of the United States, many of us are searching for an explanation for what happened. “Why are our politics so divisive? This is not the America I know!”

This is a worthy question, but I don’t think anyone has really nailed it yet. This year, I’ve heard many political reform suggestions, including some that I support: ranked choice voting and processes to prevent gerrymandering. These two reforms would tend to make our quotidian politics more moderate and post-fact campaigning a riskier strategy.

But I want to focus on something else. I can’t shake the idea that we’re way out of equilibrium in terms of optimal country size. If this idea is correct, then at least some of our problems could be the result of a mismatch between reality and the unexamined assumption that we all have to be in this together.

The theory of optimal country size

The classic economics paper on optimal country size is by Alesina and Spolare (1997). They advance a number of theoretical claims in the paper, but in my view the most important ones are on the relationship between political and economic integration.

Suppose that the world is full of trade barriers. Tariffs are high, and maybe also it’s just plain expensive to get goods across the ocean, so there’s not a lot of international competition. In this situation, there is a huge advantage to political integration: it buys you economic integration.

In a world of trade barriers, a giant internal free trade area is one of the most valuable public goods that a government can provide. Because many industries feature economies of scale, it’s better to live in a big market. If the only way to get a big market is to live in a big country, then megastates have a huge advantage over microstates.

On the other hand, if economic integration prevails regardless of political integration—say, tariffs are low and shipping is cheap—then political integration doesn’t buy you much. Many of the other public goods that governments provide—law and order, social insurance, etc.—don’t really benefit from large populations beyond a certain point. If you scale from a million people to 100 million people, you aren’t really better off.

As a result, if economic integration prevails, the optimal country size is small, maybe even a city-state.

In fact, global economic integration is proceeding apace. 50 years ago, the World Bank estimates that the global volume of international trade was about 25 percent of GDP. Today, it’s more like 58 percent. Over the same period, global GDP (in current dollars) has grown from around $2 trillion to over $70 trillion, around five-fold when adjusted for inflation. So over 50 years, global trade has grown from half a trillion dollars to over $40 trillion, a factor of 12 or so when adjusted for inflation.

Tariff barriers have fallen considerably—in the UK beginning in the 19th century, in the United States in the late 1930s, and in the developing world more recently. 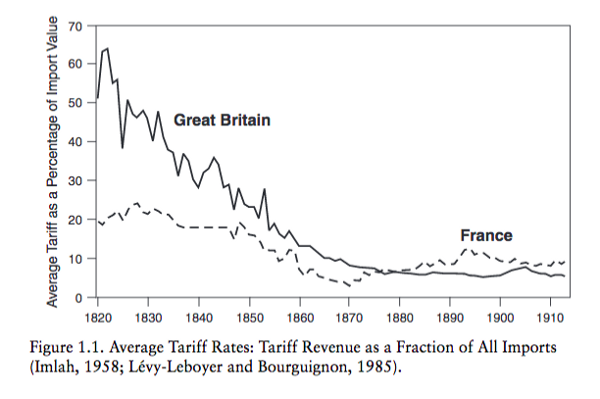 While tariff rates are a policy decision and can therefore be undone, a fall in shipping costs represents a permanent, exogenous increase in economic integration. David Hummels (2007) has noted that freight costs are perhaps more significant than tariffs. The cost of air freight (which Hummels argues is economically underrated) has plummeted since the 1950s. Ocean freight prices have also fallen, though not as substantially.

Furthermore, even though tariffs can rise in response to policy choices, the nature of the modern economy creates political pressure to keep them low. The optimal market size for modern goods is often infinitely large. Once you’ve invested the money to develop an iPhone, it doesn’t make sense to not try to sell it in as many markets as possible. Similarly, for small governments, it doesn’t make sense to think that you’ll be able to produce an acceptable smartphone competitor by keeping Apple out of your country. These two effects put pressure on everyone to keep economic integration going.

One key point here is that global economic integration has dramatically increased over the last several decades. A second one is that, given the state of technology (falling freight costs and infinite-scale, modern goods), we are unlikely to revert to the relative autarchy of a century ago.

Political disintegration is happening all over the world

It’s not just Brexit. Nor the near-miss on Scottish secession in 2014. Nor next year’s Catalonia referendum. The list of active separatist movements is so large that Wikipedia has to break it up by continent (it’s worth taking the time to browse these).

Between the decline of colonialism and the disintegration of the Soviet bloc, the number of independent countries has tripled in the last 100 century or so.

These data indicate that there is at least some movement in the direction of efficiency. The benefits of empire are falling. As economic integration proceeds, not only is the optimal country size smaller, political-economic forces seem to actually move countries closer to the optimal size, i.e., cause disintegration.

The United States is a huge outlier

Over the course of its history, the United States has grown from its humble origins on the Eastern Seaboard to encompass a large territory. That territory has rarely gotten smaller. The continental US is not much different than it was in the 1840s. In addition, we have added Alaska and Hawaii as states, and several other territories.

The Civil War aside, the United States has largely resisted the global trend of political disintegration. If optimal country size is smaller today than it was a century ago, then North American polities should also be smaller than they were a century ago, but they’re not.

The United States is not really one nation

In his book American Nations, Colin Woodard argues that North America is actually composed of 11 distinct cultures, each dominant in different parts of the continent. Many of our internal political divisions—over gun control, the death penalty, abortion, the welfare state, immigration, and more—may actually reflect these cultural differences. 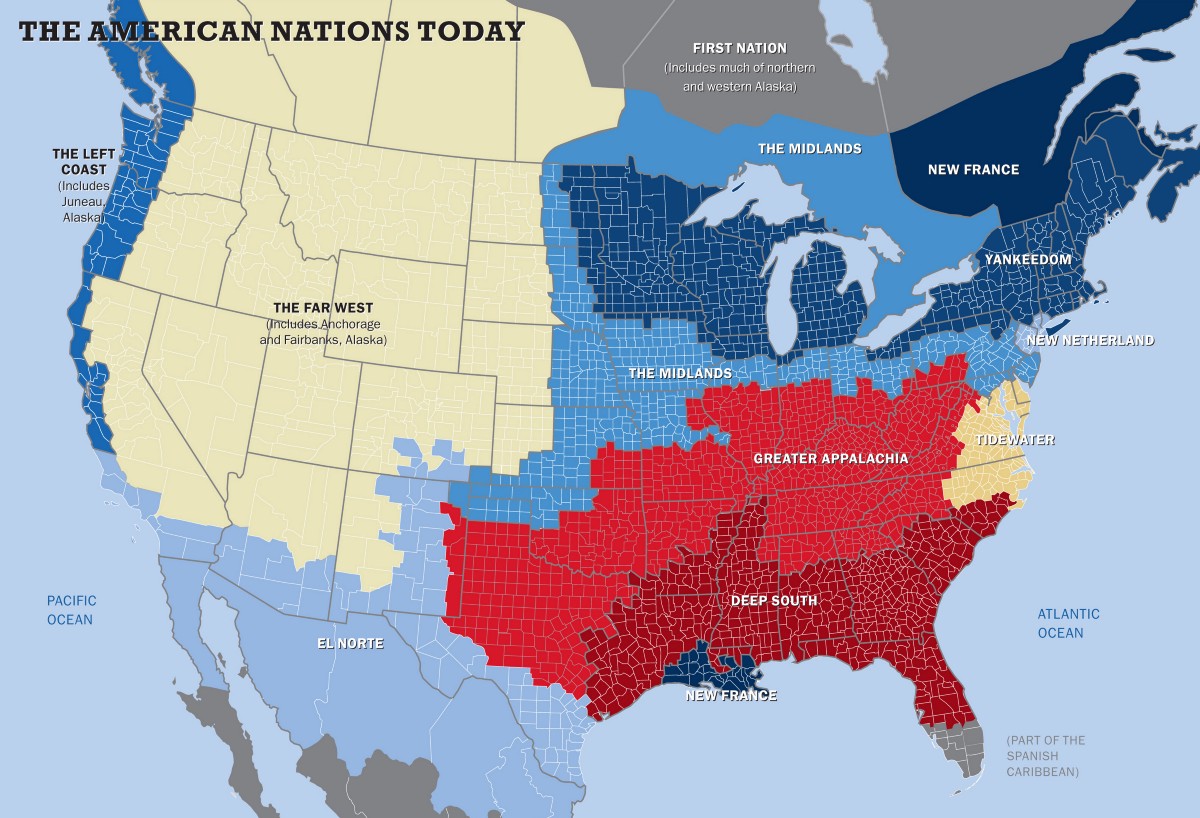 These cultural differences mean we are working at cross purposes. Culture might lead directly to differing policy preferences. In addition, political discourse is one of the means by which we raise and lower the status of various groups. If culture varies deeply, it’s no surprise that basically everyone is offended by the discourse somewhere else in the country.

To be sure, there are differences of political opinion within each of the 11 territories Woodard delineates as well as across them. That’s beside the point. The issue is the cultural assumptions that prevail in a nation. In the United States, those assumptions are not widely shared.

Maybe we should partition the United States

Regardless of whether you think 11 is the right number or whether you otherwise agree with Woodard’s map, one has to wonder whether having heated political debates on sensitive topics with fellow Americans who have potentially wildly different cultural assumptions is productive. We can opt out of these discussions by agreeing to go our separate ways. It might seem far-fetched, but California could hold a referendum on secession as soon as 2019.

Given what we know about optimal country size, a monolithic America makes less sense today than it did a century ago. What made America into the superpower that it is today is its massive internal free trade area. Now that trade barriers have declined worldwide, this is less of an advantage than ever before. It’s not at all clear that this diminishing advantage outweighs the cost of our divisive politics based on unshared cultural assumptions.

To be sure, there may be good reasons not to partition the country. Who knows what it would do to international relations to have 11 mini-Americas running around? Who gets the nukes in the divorce? I can easily see partition being a mixed bag.

And I don’t think we should dissolve the Union based on sour grapes after one election. The point is much more macro. There are people on all sides of the political divide who have been unhappy for some time. We don’t actually have to all live together under the same government. We don’t have to have political battles that are this divisive. Maybe we should consider our options.