A picture for Krugman

“The lights are going out all over America—literally.” So begins Paul Krugman’s latest NY Times column, in which he laments the crumbling of America’s foundations. The proximate cause of this decline, according to Krugman, is insufficient government spending on infrastructure and education. But the root cause is rhetoric:

How did we get to this point? It’s the logical consequence of three decades of antigovernment rhetoric, rhetoric that has convinced many voters that a dollar collected in taxes is always a dollar wasted, that the public sector can’t do anything right.

I could easily write a thousand-word post refuting this claim, but that would just be more antigovernment rhetoric. Instead, I want to show you a picture. The data comes from the BEA’s NIPA Tables (3.1, 1.1.4, and 7.1). 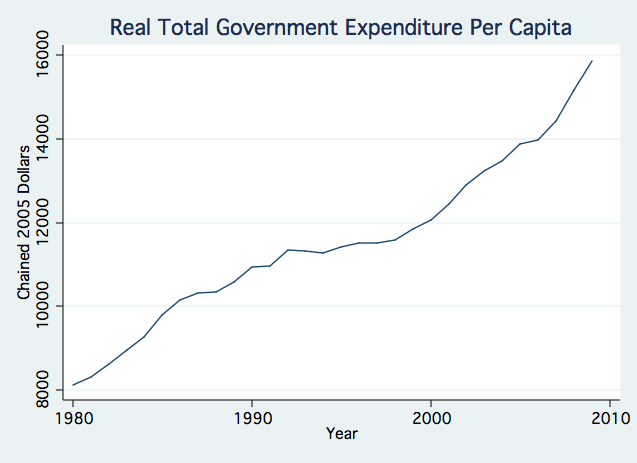 If antigovernment rhetoric over the last three decades were as effective as Krugman claims, what would this picture look like?